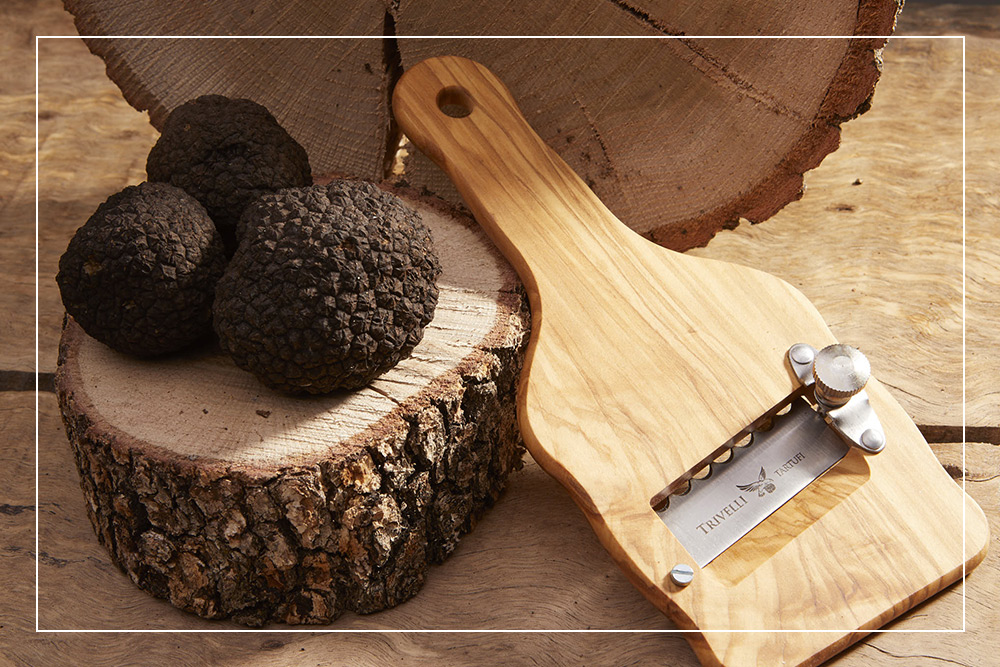 Black winter truffles, also known as autumn truffle or tartufo uncinato, is a protagonist of this period of the year. Let’s discover more about It

What is black winter truffle?

The black winter truffle (a.k.a. tartufo uncinato, winter scorzone or autumn truffle) looks like a summer truffle but it is not.

This black autumn/winter truffle (whose scientific name is Tuber Uncinatum Vitt) is very reminiscent of the summer truffle, so much that it is often confused by those who do not know the different periods of truffle harvesting well.

Therefore, the tartufo uncinato and the summer scorzone are close relatives: the uncinato, in fact, is also called winter scorzone. To trivialize…let’s say that the black winter truffle is a scorzone…with “turbo-boost”!

One of the main differences between those two truffles relies on the altitude where they usually grow. In fact, the tartufo uncinato is a mountain truffle. It is a summer truffle that has adapted to colder climates and, instead of being born in winter like summer, it is born in summer and ripens in winter.

When we talked about the scorzone in fact, we said that its harvest period is from May to September.

When is black winter truffle season?

Right now! In fact, it ripens between the end of September and the end of December (in some regions until mid-March, in absence of snow).

This truffle shares the harvest period with the precious white truffle but differs from all other types of truffles for some characteristics that make it unique in the family of these extraordinary underground mushrooms.

So, let’s find out together how to recognize the black winter truffle.

We want to tell you everything you need to know about this protagonist of many recipes, especially in this part of the year.

At first glance, those who are not well versed in the varieties and periods of truffle harvesting could mistake the black winter truffle for a summer truffle or scorzone. This kind of mistake can also be favored by the warty outer part (the peridium), similar to the one of the summer truffle – tartufo uncinato warts are smaller and more accentuated than those of the scorzone. However, using a microscope, we can discover unique   characteristics like several small hook-shaped ridges on the truffle spores.

These are the ones that give the name to this variety and make us recognize the tartufo uncinato.

The darker color of the serf (the inner part) also differentiates the black autumn/winter truffle from the summer truffle. This part tends to chocolate color and (when ripe) has branched whitish veins.

In addition to the shape, which can be both rounded and crushed, it is also the price that defines this variety: it is, in fact, higher than that of the scorzone.

Since the ripening period of the black winter truffle is more limited than that of the scorzone the price tends to be higher.

Be careful, however, not to confuse the tartufo uncinato with another similar truffle, remarkably similar, which is found in the same period, at the same altitude and often also in the same habitat. We are talking about the tuber bellonae, a widespread truffle throughout the Apennines, especially in the center-south of Italy.

This truffle can be confused with the tuber mesentericum (a sort of “cousin” with the same strong smell, resembling for some to mothballs, for others to gasoline).

The tuber bellonae has a very similar peridium to the one of the black winter truffle. The difference relies on a barely perceptible reddish reflection that sometimes can even deceive experts.

Since those similarities, the best way to recognize it is to resort to a small carving to check its serf, which is brown but with amaranth/violet reflections.

How to use the black winter truffle: the recipes

The flavour of the black winter truffle is unique: more fragrant than the scorzone and with a much more pleasant scent than other truffles. This type of truffle has an intense flavour, reminiscent of hazelnuts, with notes that also recall porcini mushrooms and grana. These characteristics make it particularly versatile and ductile in the kitchen.

Once cleaned with a soft (rinsed underwater and dried) bristled brush, the black winter truffle is ready for your recipes. It can be used for autumn recipes such as tagliatelle or risotto with black winter truffles. This truffle is also ideal to enhance a second course, preparing a truffle sauce to be served in combination with meat or very original truffle crêpes.

Finally, it can also be simply used cold, adding a few flakes to a buttered crouton, to present your diners with an appetizer with an intense taste.

Of course, since it is part of the truffle family, it is good to always remember that even the black winter truffle should not be cooked violently: it should simply be sliced raw or heated for a few minutes, to let it release all its flavour and fragrance to enhance your recipes. Otherwise, it would end up losing its unique characteristics and flavour.

Where to find the tartufo uncinato

Where is this variety of truffle found? What is its habitat?

The black winter truffle prefers shaded areas, not directly exposed to the sun (which blocks its proper ripening). Given that, it is usually found in mountain environments, from 800 meters up above sea level, where the soil is moist and rich in humus and clay, such as the woods of downy oak, hornbeam, Turkey oak and beech – which are all symbiont plants of the black winter truffle.

These characteristics are found in typical areas of Piedmont, Emilia Romagna, Marche, Umbria, Lazio, Campania, and Molise. And of course, in Abruzzo, where the tartufo uncinato (also known as suareccio truffle) grows in abundance, precisely because of the specific conformation of the soil.

The enemy of the tartufo uncinato are arid areas, with extended periods of drought, which do not allow this variety to find a good habitat to grow.

A cliché wants autumn to be nothing more than a cold prelude to winter, made of dull and gray colors: nothing could be further from reality! On the contrary, for those who know how to appreciate it, this season is full of fascinating flavors, which simply need a time and a deeper disposition of mind…

and the tartufo uncinato is a perfect symbol of this period: an exclusive taste, which is revealed to those who know how to appreciate it, and in which the strongest flavors and the most intense autumn suggestions are mixed, in a crescendo that can only fascinate.

So, let yourself be seduced by the scents and suggestions of the black winter truffle, a great protagonist of this period, able to fascinate even those who have just begun to know about the truffle family with its fragrance.